Central Indiana’s Total Indoor Comfort Experts Since 1986
Protection YOU Can Trust, From the Family That Cares 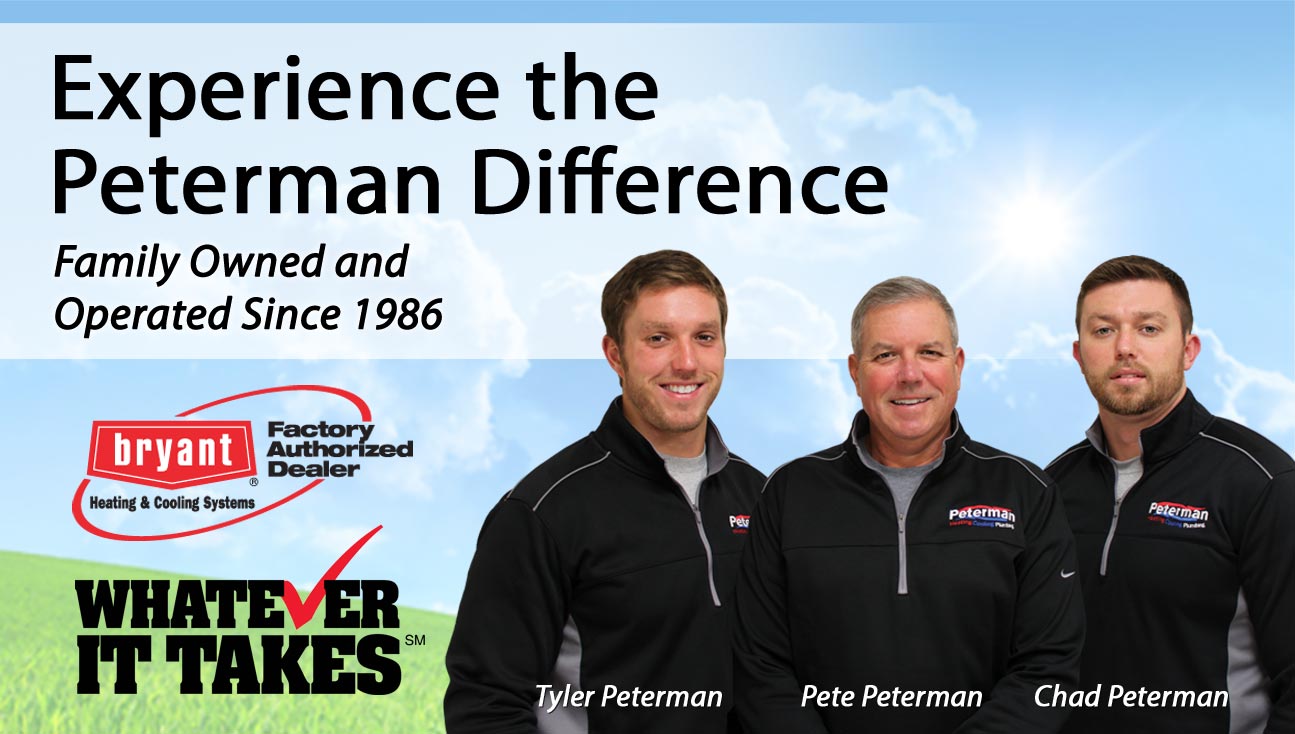 Peterman Heating, Cooling & Plumbing, Inc. was started in 1986 by Pete Peterman. A native of Beech Grove, Pete decided after 3 years working for someone else in the heating industry, it was time to go out on his own. With Pete’s wife Beth pregnant with their first child (Chad), this was not the most popular decision in the Peterman household, but one that would forever change the lives of this young family.

If there is one thing Pete knew he would have to do out on his own, it was go over and above to make sure his customers were satisfied. Over the past 30 years, this has been the driving force behind the company and its continued growth. At, Peterman it is our goal each and every day to provide the best possible customer service experience. Whether you have an issue with your heating system, a fault water heater, or main line sewer stoppage, each employee at Peterman is guaranteed to give each customer an experience they will not soon forget.

We have grown over the years and now employ close to 50 qualified heating and plumbing technicians along with a tremendous customer service staff. We have two locations both in Indianapolis and in Columbus, IN making it so we can service all our great customers no matter the time of day.
Two of those employees that have joined our growing team include Pete’s two sons, Chad and Tyler. Both boys grew up around the business and have taken on numerous responsibilities. Chad is the oldest and overseas the residential side of the business for both heating and plumbing. Tyler works primarily with the new construction department. Both boys attended Roncalli High School on the south side of Indianapolis before Chad went off to study at Wabash College and Tyler attended the University of Indianapolis.
Peterman is now a complete family affair with all the Petermans involved in the day-to-day operations of the company!

Pete grew up in Beech Grove where he attended Holy Name Catholic School and later Beech Grove High School. The eldest of five, Pete learned very early on the importance of hard work and his passion for hands-on work. These things led him to attend ITT Technical Institute after high school to study the HVAC trade. Upon graduation, Pete worked for a small heating company in Beech Grove before deciding to go out on his own. Over the years, Pete has been the driving force behind the steady growth of the company and employment for close to 50 employees.
Pete enjoys spending time with the family at the lake, hunting, and sitting on the beach in Florida. He is also an avid Indiana Pacers fan and enjoys coaching the team from the stands?

Chad grew up with his younger brother Tyler on the south side of Indianapolis and attended Nativity Catholic School and later Roncalli High School where he was a three-sport athlete and captain on the three-time State Championship football team. After high school, Chad attended Wabash College where he played football and graduated in 2009 with honors. In 2014, Chad completed his MBA at the University of Indianapolis and received the “Top Scholar” award in the program. In his free time, Chad enjoys spending time at the lake and relaxing on the beach in Florida.

Tyler also attended Nativity Catholic School and later Roncalli High School. Tyler was a standout athlete in high school completing in both football and basketball, while receiving numerous accolades for his accomplishments on the field and court. His hard work was realized when he received an athletic scholarship to play football at the University of Indianapolis. Tyler graduated from UIndy in 2012 and began his career at Peterman. Tyler is currently studying to earn his plumbing license and enjoys spending time at the lake, hunting, and working around his house.